It has been a couple of weeks since the first copies of Tales from a Broken Heart shipped out and I have had a few comments that I thought I’d share. You will notice, of course, that the four comments I am going to post are all positive. Would I, you may be asking yourselves, post a comment that said “Shit album, I hate it!”. Well, yes, I would actually but so far I am lucky enough to have only had positive feedback.

I chose the four comments randomly from all I had received, so many thanks to everyone who has commented, they are most welcome. Self releasing an album is, in theory and practice, pretty easy to do these days. Getting it noticed and played is an entirely different ballgame. Lots of publications don’t take records from ‘unsolicited sources’ whatever the fuck that is supposed to mean but basically one can take that as someone who does not have a record company or agent to filter through. It is amazing how no one wants anything to do with you until you have done virtually all of the work, then people come running to offer you a whole host of services for a percentage or up-front fee, of course.

These comments are directly from the people who bought the record. Ordinary, everyday, brilliant music loving people. Sometimes it is very difficult to stick to your own vision but in the end, our own visions are all we have left.

“I just wanted to say how impressed I am with your album. It is absolutely superb. Stay is a truly wonderful song. In particular the bridge with the ‘it’ll be alright’ refrain. I am not lying when I say that part of the song makes the hairs on the back of my neck stand up. Apart from classical music, there are not many songs that do that to me!”

“A brilliant and brave record that at times is not easy to listen to. Despite this, I keep listening to it.”

Buying the CD will instantly entitle you to the download as well, in any format you want. You can get both from here http://paulsmith.bandcamp.com/

Posted by Paul Smith on March 9, 2013
Posted in: Music. Leave a comment

On Tuesday 5th March, 2013 I got a phone call from the courier company. Was I going to be in the following day as they had a delivery for me. It was the records and I responded in the positive with a ‘Fuck, yes’. They didn’t specify a time (when do they ever) so I was up and about by 7am, just in case.

I lounged around not making too much noise for fear of missing the knock on the door. For a while I read a couple of books and every time I heard a sound in the road I dashed to the window saying out loud ‘this will be my records’. After the twentieth time my enthusiasm did not wane and like some dutiful panting dog, I continued to rush to the window every single time.

I was teased and tricked by a UPS van twice until, at 3.30pm, a big white truck pulled up and the nice man helped me load the boxes of CD’s into my house. It was here at last.

I hooked one out and checked it over. Everything had come out very well indeed. My pre-order envelopes were already addressed and the first thing I did was mail off the pre-orders to all the good people that had already bought the record. So it’s here and can be had from:

Thank you to those who have already bought the record, I hope you like it. 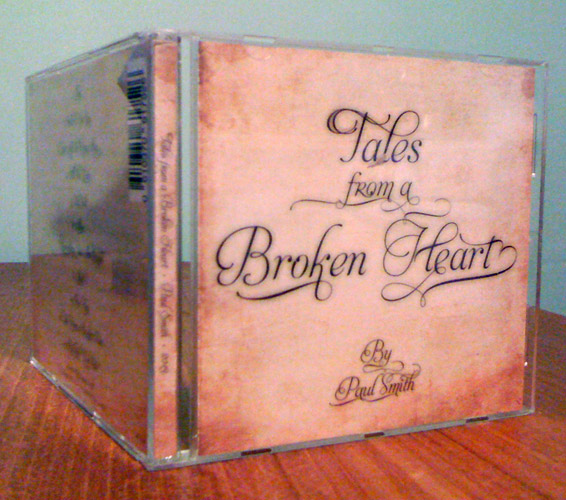